Click here to program the Atari 2600 in the 8bitworkshop IDE now!

128 bytes RAM (can be expanded by cartridge) 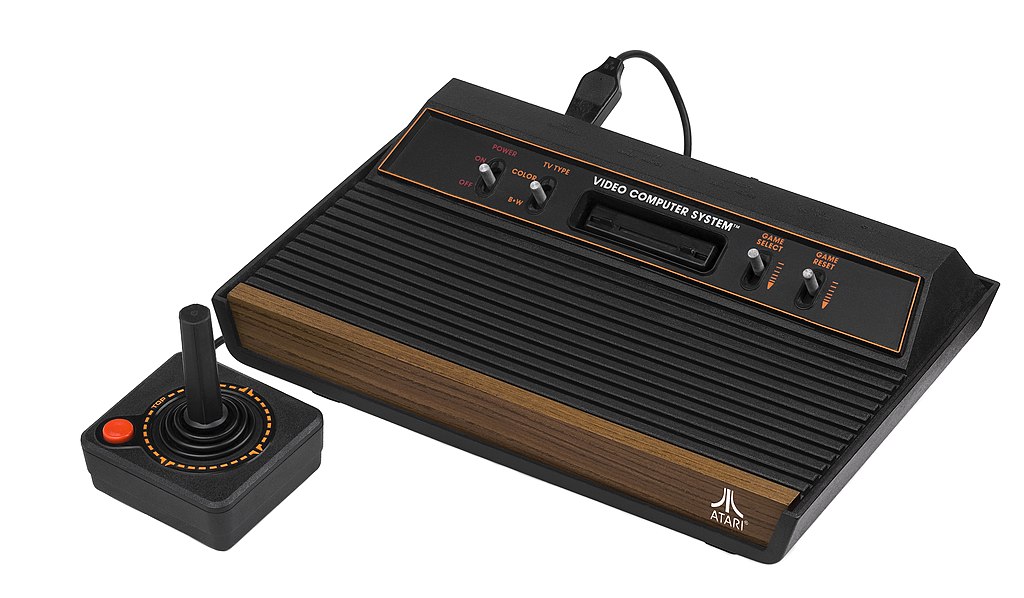 Atari was founded by Nolan Bushnell and Ted Dabney in 1972 to commercialize video games, which were at this time only found in university basements. They developed the arcade games Computer Space and Pong, the latter becoming a huge success. They also developed more complex games like Tank which included a ROM chip.

Atari developed a Pong home console, but wanted to develop a console that could play more than one game. In 1975 MOS Technology announced the 6502 CPU, which at $5 (volume pricing) made a programmable home console feasible. To save money on RAM, they’d omit the typical frame buffer, relying on the 6502 to program the TIA chip right before each scanline.

By 1974, Atari had acquired Cyan Engineering, and hired Joe Decuir to help debug the first prototype, codenamed “Stella”, and to demonstrate that it could play Tank (later released as the Combat cartridge.) Jay Miner worked on the ASIC design for the TIA chip, and they completed the second prototype by March 1976. The final system included these chips:

Bushnell considered taking Atari public but instead sold the company to Warner Communications for US$28 million; subsequently, Warner provided approximately US$100 million in new funding, allowing Stella to be prioritized and fast-tracked.

The VCS was the best-selling console during the 1979 holiday season, with more than 1 million units sold. It helped Atari earn more than $2 billion in 1980. In 1982 it was rebranded the Atari 2600.

Activision, formed by four former Atari VCS programmers, led the vanguard of third-party game development thanks to a victory in court. But changing market conditions made the boom short-lived. By mid-1984, software development for the 2600 had essentially stopped except for that of Atari and Activision. Atari’s Consumer Division was sold to Commodore founder Jack Tramiel, who shifted the business’ focus to home computers and ended all development of console games.

Because of the precise timing required, the VCS is usually programmed in 6502 assembly language. A “kernel” runs while the video signal is active, setting up the TIA for each scanline. Other game logic usually runs during the blank portions of each frame.

Inserts the code required for a proper 3 scanline vertical sync sequence. Modifies A.

Set a 2 byte pointer to an absolute address. Modifies A.

The timer will be set so that it expires before lines scanlines. A WSYNC will be done first.

Use with TIMER_SETUP to wait for timer to complete. Performs a WSYNC afterwards.