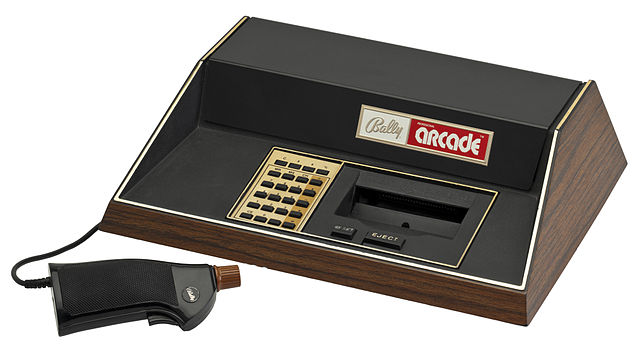 In 1977, Bally/Midway introduced the “Bally Home Library Computer” sold exclusively via mail order. No units were shipped until 1978, where it was renamed the “Bally Professional Arcade” and marketed via retail outlets with the trademarked tagline “Fun & Brains”.

The console had two built-in games which were ports of Midway arcade games – Gunfight and Checkmate. You could also start a “Scribbling” paint program, or use an on-screen calculator.

Affixed to the console was a 24-key keypad, used for game menus or for the built-in Calculator app. It could also be used with the Bally BASIC cartridge to write simple games and graphics demos. An audio jack was built into the cartridge, which allowed reading and writing from a cassette tape.

The ambitious system never attained the popularity of the Atari 2600. It had overheating problems (the manual warned against using it on carpet) and poor marketing that couldn’t decide if the product was an awkward BASIC machine or a game console.

The system was then renamed “Bally Computer System” and sold to Astrovision in 1980, who again renamed the system to “Astrocade: The Professional Arcade” (video).

A more powerful “add-under” expansion called ZGRASS was announced (ZGRASS was a BASIC-like language developed by digital artists at the University of Chicago, supporting advanced graphics and animation primitives). The promised expansion was never released, and Astrocade filed for Chapter 11. However, third party expansions like Blue Ram and the Viper System were available.

!!! Fun Fact: The GRASS language was used to produce the “Death Star plans” animation for the 1977 Star Wars movie.

!!! Another Fun Fact: Jamie Fenton claims that the expansion unit in the National Videogame Museum may actually contain FORTH, not BASIC. Jamie wrote Gorf and Robby Roto in FORTH.

The Astrocade is powered by a Zilog Z80 at 1.789 MHz. This is on par with many early microprocessor-based arcade games like Sega’s Carnival.

The design includes a “micro-cycler” architecture that combines the address and data buses into a single bus to reduce the pin count on custom chips. It also sends wait signals to the CPU when the display circuitry is reading from RAM, so programs can write to video memory at any time without corruption.

The Astrocade packed in 8 KB of dynamic RAM, a cavernous amount for the time. The designers used a cost-saving measure pioneered by early Midway arcade games:

“The frame buffer used refresh spec fallout 4K x 1 DRAMs. These were cheap and easy to get at the time because all the manufacturers had problems meeting the refresh specs. Since we read out data during all lines, refresh was no problem. This idea was originated on the original Midway monochrome 8080 based games – Gunfight, Seawolf, etc.” – Tony Miller, Stern Electronics (Berzerk, Frenzy)

The Astrocade’s frame buffer has a resolution of 160 x 102 pixels. Each pixel can take one of 4 colors, drawn from a palete of 256.

The system palette actually contains 8 colors – the screen can be split vertically at a configurable X coordinate, so that left and right sides show a different set of 4 colors.

At the maximum resolution of 102 scanlines, the frame buffer takes up almost all available RAM, and there are only 16 bytes available for programs, including the stack. Most games display 98 or fewer scanlines to reserve room for the BIOS and stack.

!!! The Bally BASIC used a clever hack to expand the amount of available RAM. Each pixel on the screen was shared – one bit for BASIC, one bit for the display. The palette was set up so that the BASIC bit was ignored, and thus only two colors could be displayed on the screen.

The console included a “video processor” chip developed by Dave Nutting Associates for Midway. It is also called the “Magic System”. The same chip was used in coin-op games like Gorf and Wizard of Wor, but at 320 x 204 resolution.

This chip does not include hardware sprites, but instead accelerates video RAM operations via a function generator. It can be configured to shift, expand, combine, mirror, and/or rotate pixels as they’re written to the frame buffer.

The function generator is accessed via “magic memory” – a memory-mapped region that shadows the frame buffer. When this region is written to, a sequence of operations are performed according to flags in the hw_magic register. The resulting byte is then written to the frame buffer. As far the CPU is concerned, this happens transparently.

The “music processor” (0066-117xx chip) is similar to the Texas Instruments SN76489 in functionality. It has three square wave channels driven by a master frequency, and a noise generator. There is also a vibrato circuit, which can be distinctly heard in the opening dirge of Wizard of Wor.

You can program the sound registers directly, or ask the BIOS to play music in the background. The music itself is programmed in a special instruction set, executed via a virtual machine (MUZCPU).

!!! You won’t hear vibrato in the 8bitworkshop IDE, because the emulator doesn’t support it yet.

The Astrocade BIOS has a rich set of system functions. These are accessed through the User Program Interface, which defines conventions for calling routines and entering/exiting interpretive mode, which allows multiple commands to be strung together.

The categories of system routines include:

!!! The IDE doesn’t use the original Astrocade ROM. It uses AstroLibre, our written-from-scratch sort-of-compatible open-source BIOS, so not all calls will be supported, and the menu system is not available. The IDE will use an alternate ROM if one is uploaded to the filename astrocade.rom.

Programming the Astrocade in Assembler¶

8bitworkshop supports programming the Astrocade in Z80 assembly language using the ZMAC assembler. The assembler uses a set of macros (defined in hvglib.h) to interface with the BIOS.

To save bytes, the BIOS supports “interpreter mode”. This mode executes BIOS routines with a primitive bytecode, relieving us of the burden of placing parameters into registers, and allowing for much more compact code.

To start interpreter mode, we use the SYSTEM INTPC macro:

This macro generates a RST $38 instruction, which jumps to a subroutine at memory address $38. The RST instruction pushes the Program Counter (plus 3) onto the stack, which the interpreter routine uses to find the address immediately following the RST command. This is where the interpreted routine starts.

Our first command is SETOUT, which does several things:

Each interpreter command starts with the DO macro, specifying the routine to execute. This is followed by either DB (8-bit) or DW (16-bit) parameters, depending on the routine. SETOUT takes three parameters:

Then we set the color palettes with the COLSET command, passing a pointer to an array of color bytes:

The FILL command fills the screen (or RAM) with a specific pattern of pixels:

We can use STRDIS to display strings in the Astrocade’s built-in font. (You can even enlarge the font by 2x, 4x, or 8x!)

After the interpreter encounters an EXIT command, it returns to the address immediately following the EXIT opcode. The CPU takes over from there, and runs Z80 code again.

The Better Bally Book has a detailed list of routines and which registers need to be set for each.

You can also program in C using the SDCC compiler. The 8bitworkshop IDE provides a rich interface to the Astrocade BIOS from C:

There are C macros which do SYSTEM calls:

The macros can only be used with constant parameters, because they expand into inline assembly statements.

There are also C functions that can take complex expressions as parameters:

You can draw sprites via the BIOS. First, you define a pattern:

Then you can draw it at a given X/Y coordinate:

The BIOS has a powerful mechanism for waiting for external events and/or interrupts. First, we wait for a code from the SENTRY routine:

Then we switch based on the result.

SSEC means “one second has passed” so we increment a BCD counter and draw it to the screen. SP0 means “paddle 0 moved” so we set the horizontal color boundary according to the paddle position. Many other options are possible, incuding waiting for timers and keypad, joystick and trigger changes.

Video memory is exposed as 2-dimensional C arrays. You can write directly to the frame buffer (vidmem) or “magic” memory (vmagic).

To draw a single pixel, we have to find the appropriate byte, by dividing the X coordinate by 4. We then have to shift the pixel color by 0, 2, 4, or 6 bits, depending on the remainder.

We can use the “magic” function generator to accelerate this shift operation. We set the desired shift amount in the hw_magic register, and then write to the vmagic space:

Some operations take more than one write to complete. The M_XPAND option converts each bit into a 2-bit pixel, where off/on values are mapped to one of two colors, determined by the hw_xpand register. You can use this to convert a bitmap to a 2-color pattern. First set up the registers, then write the same byte to two consecutive locations:

Like many of its later-generation peers, the Astrocade supports raster line interrupts. You just have to set the hw_lin register to tell the hardware at which scanline to trigger the interrupt. You can even change this register multiple times during a frame for multiple screen splits.

Our interrupt handler sets the palette colors based on a counter. Then it updates the hw_lin register so that the next interrupt will fire four scanlines below the current scanline.

See “Rainbow” for a working example. The “Pseudo 3-D Racing Game” example has a more complex set of interrupts, splitting the screen into several regions (this example probably deserves its own blog post).

The Astrocade is a neat little machine that is fun to program. It has a simple frame buffer architecture, nifty “magic” function generator, and rich BIOS support. It may yet have tricks up its sleeve waiting to be discovered!

Click here to program the Astrocade in the 8bitworkshop IDE now!