Click here to program the NES in the 8bitworkshop IDE now! 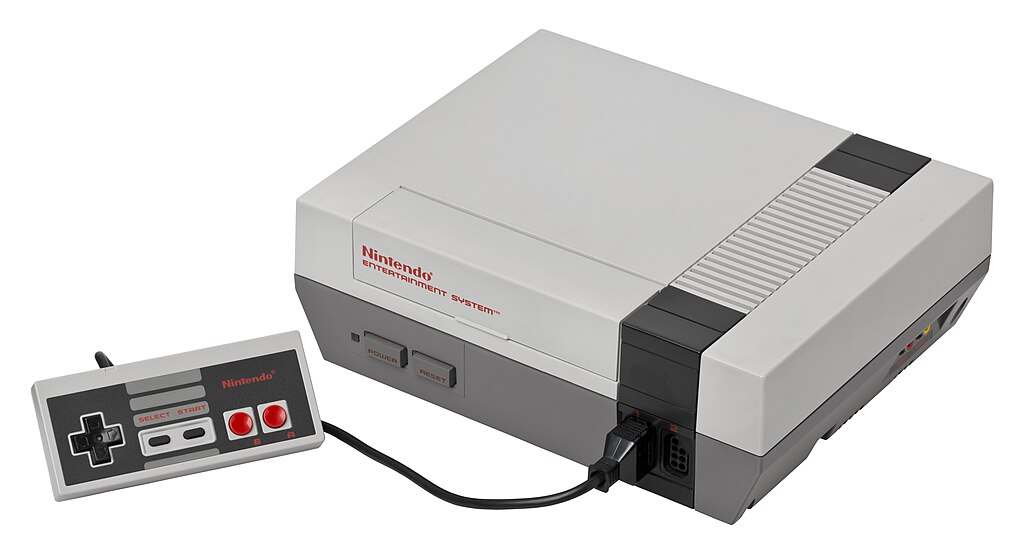 Following the success of their Game & Watch series and the Donkey Kong arcade hit, Nintendo made plans to create their own home game console with interchangable cartridges. Internally dubbed GAMECOM, it was renamed Family Computer (Famicom) based on a suggestion from the wife of Masayuki Uemura, head of Nintendo’s R&D2 group.

Nintendo almost licensed the ColecoVision wholesale for the Japanese market, due to the success of its Donkey Kong port, and their familiarity with the Z80 CPU. But instead they forged ahead with their own design.

The personal computer boom had led to a shortage in microprocessors, and few suppliers wanted to take on the risky prospect of a new game console. The manufacturer Ricoh had lots of spare capacity and personal connections with Nintendo engineers. They agreed to help produce custom chips for the new game console, with Nintendo guaranteeing them a three-million chip order.

Ricoh suggested the 6502 CPU, which took up less chip space than the Z80. Nintendo was unfamiliar with the 6502, but they surmised that its obscurity would stall competitors hoping to reverse-engineer the console. The Nintendo chip omits the BCD (Binary Coded Decimal) logic for legal reasons, but adds a complex sound generator and a DMA controller.

Nintendo approached Atari, who was already prototyping its MARIA console (later sold as the Atari 7800) and looking for an alternate console should its plans fall though. But the video game crash of 1983 would keep the Famicom in Japan for the time being.

The Famicom was released on July 15, 1983 for ¥14,800 (equivalent to ¥18,400 in 2019) alongside three ports of Nintendo’s successful arcade games Donkey Kong, Donkey Kong Jr. and Popeye. Its “plus controller”, now known as a game pad, was lifted straight from the Game & Watch.

At June 1985’s Consumer Electronics Show (CES), Nintendo unveiled the American version of its Famicom, the NES. It featured a new case and a “zero insertion force” cartridge slot.

For the nationwide release, Nintendo offered the “Action Set” which replaced the gimmicky Robotic Operating Buddy with Super Mario Bros.

Almost all NES commercial titles were written in 6502 assembly language. This allowed developers to fine-tune each and every byte of their programs. This was critical when fitting games into the small but expensive in the game cartridge. It also allowed for clever optimizations which squeeze the most performance possible out of each frame of animation.

Nowadays, homebrew NES developers usually write games in either assembler or C, the latter using the cc65 compiler toolchain. Writing in C gives you more functionality per line of code. While it has lower performance and greater code size than a well-written assembly program, you can still write a pretty good game in C.

NES games come in cartridges, and inside of those cartridges are various circuits and hardware. Different games use different circuits and hardware, and the configuration and capabilities of such cartridges is commonly called their mapper. Mappers are designed to extend the system and bypass its limitations, such as by adding RAM to the cartridge or even extra sound channels. More commonly though, mappers are designed to allow games larger than 40K to be made. 8bitworkshop’s built-in JSNES emulator simulates many of these circuits.

Emits a iNES cartridge header before the start of program. The mirroring parameter can be NES_MIRR_HORIZ, NES_MIRR_VERT, or NES_MIRR_QUAD.

Send a constant byte to PPU_DATA.

Clear all RAM, except for last 2 bytes of CPU stack.

Wait for vertical sync to start.

Return either joypad’s bits in A register. Y must be set to 0 or 1.

Macros and functions for programming the APU sound generator.

set virtual bright both for sprites and background, 0 is black, 4 is normal, 8 is white

set virtual bright for sprites only

wait virtual frame, it is always 50hz, frame-to-frame in PAL, frameskip in NTSC

turn off rendering, nmi still enabled when rendering is disabled

turn on bg only

turn on spr only

get current video system, 0 for PAL, not 0 for NTSC

Return an 8-bit counter incremented at each vblank

clear OAM buffer, all the sprites are hidden

hide all remaining sprites from given offset

set sprite in OAM buffer – chrnum is tile, attr is attribute, sprid is offset in OAM in bytes returns sprid+4, which is offset for a next sprite

set metasprite in OAM buffer – meta sprite is a const unsigned char array, it contains four bytes per sprite in order x offset, y offset, tile, attribute x=128 is end of a meta sprite returns sprid+4, which is offset for a next sprite

play a music in FamiTone format

call from NMI once per frame

poll controller and return flags like PAD_LEFT etc, input is pad number (0 or 1)

poll controller in trigger mode, a flag is set only on button down, not hold if you need to poll the pad in both normal and trigger mode, poll it in the trigger mode for first, then use pad_state

set scroll, including the top bits it is always applied at beginning of a TV frame, not at the function call

set scroll after screen split invoked by the sprite 0 hit warning: all CPU time between the function call and the actual split point will be wasted! warning: the program loop has to fit into the frame time, ppu_wait_frame should not be used otherwise empty frames without split will be inserted, resulting in jumpy screen warning: only X scroll could be changed in this version

set scroll after screen split invoked by the sprite 0 hit sets both X and Y, but timing might be iffy depending on exact sprite 0 position

put a byte at current vram address, works only when rendering is turned off

fill a block with a byte at current vram address, works only when rendering is turned off

read a block from current address of vram, works only when rendering is turned off

write a block to current address of vram, works only when rendering is turned off

unpack LZ4 data to this address

get maximum of two integers

get minimum of two integers

macro to calculate nametable address from X,Y in compile time

macro to get LSB (low byte)

The function sets a pointer to the update buffer that contains data and addresses in a special format. It allows to write non-sequental bytes, as well as horizontal or vertical nametable sequences. Buffer pointer could be changed during rendering, but it only takes effect on a new frame. Number of transferred bytes is limited by vblank time. To disable updates, call this function with NULL pointer.

The same format as for set_vram_update, but writes done right away, instead of waiting for NMI interrupt.

OR with address to put vertical run

wait for next frame, then clear buffer this assumes the NMI will call flush_vram_update()